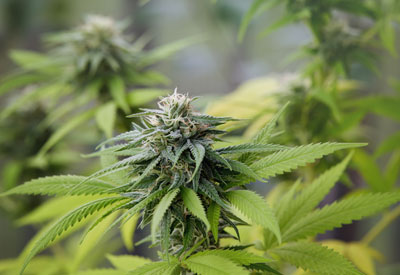 There’s a problem with legal marijuana: pesticides. Cannabis samples from shops and dispensaries in various states that have legalized the sale of recreational marijuana invariably reveal products contaminated with insecticides, fungicides, rodenticides and other compounds used to eliminate or prevent infestations. Pesticides have also been found in medical marijuana.

It’s popularly believed that legal cannabis solves one of the evils — chemical contamination — associated with black market weed. But legal weed hasn’t necessarily meant clean weed. The pesticides now being used by some legal commercial growers, like those used on some fruits and vegetables, are a danger to consumers and grow workers as well as to our waterways and the environment at large.

Many of these compounds are the same used by commercial growers of fruits, grains and vegetables. Some are not even labeled for use on food crops.

Two of the more commonly discovered compounds include myclobutanil, a persistent fungicide used on grapes and sold under the trade name “Eagle 20.” It’s been found to have negative reproductive effects on test animals. Imidacloprid, a neurotoxin that is especially harmful to bees and other pollinators, has been blamed for eye irritation, dizziness, and vomiting among farm workers applying it to food crops.

There are potentially dangerous complications of chemical use on cannabis. Processed products including oils, waxes, edibles, and others made from extracts that concentrate the active ingredients in marijuana may also concentrate pesticide residues.

And what happens to pesticide residues when they are smoked? What chemical changes take place and what health effects will the resulting toxins and off gases have?

It’s known that myclobutanil, when heated, releases hydrogen cyanide, a gas so toxic it’s been used in chemical warfare; not something smokers want to be inhaling. Mostly, toxicologists are still, well, hazy with what happens to the active ingredients in pesticides when they’re set ablaze. No one’s testing for that.

States that have legalized cannabis for consumption, some 30 including those that have okayed medical use only, have lagged when developing regulations on what sprays, dusts, and soil treatments are safe for cannabis consumers. Often, they’ve just adopted the same long, long lists of commercial products approved on food crops. They were too busy deciding how to regulate the sale, distribution, and taxation of legal cannabis while paying scant attention to the purity of the product and the health of the consumer (the exception is Washington state where a list of 271 approved pesticide products were added to its initial regulations). That seems to be changing as more and more pesticide-tainted cannabis is discovered.

When it comes to cannabis, states have to come up with their own pesticide-use controls as well as the means for making sure those regulations are being followed. Because pot is illegal at the federal level, pesticide use on cannabis is not regulated by the Environmental Protection Agency. Growers receive no guidance from any service of the Agricultural department as is available for fruit and vegetable crops.

What states have discovered is that tracking and controlling pesticide use on marijuana harvests is an especially complicated problem.

Like any agricultural crop, marijuana attracts its share of pest problems. Farmers, looking to stop or prevent infestations that will take money from their pockets, have a number of ways to respond, some safe, some not. As a flurry of legal marijuana testing, much of it initiated by the media, has shown potentially harmful chemical residues persisting in the product past the point of harvest.

A spate of surveys in the last few years looking at pesticide residues on marijuana in states where it is legal have produced some disturbing results.

Oregon, which has gone back and forth on testing policies since recreational legalization in 2015, applied strict testing to all marijuana in the state after a survey in The Oregonian/Oregonian Live news outlet found pesticides in nearly all the marijuana concentrates it sampled from products sold to medical patients. In June, 2017, The Oregonian/Oregon Live again sampled products purchased from local retail stores. Three of ten samples showed contamination, even though all carried approval from the state.

Bloomberg surveyed testing results from 900 product failures in Oregon between October, 2016 and July, 2017 and found a host of banned pesticides. Josh Wurzer, president of the cannabis testing company SC Labs, told Bloomberg that his company finds three to four contaminated samples in every ten that they test.

Colorado’s first hint that harmful chemicals were being used on cannabis came in 2012 when a former employee of a medicinal grow facility in Idaho Springs complained to the state about a lack of protective clothing for use when spraying plants. Tests at the facility found Floramite and Avid, both potent miticides not labeled for use on fruits and vegetables let alone cannabis, in the growers product.

Though the outcry was great, the state’s reaction was tempered. Two years of legal recreational pot sales passed in Colorado before state regulators began to sample product. Nearly half of the marijuana tested came back positive for unapproved pesticides. Since then, there’s been a number of pot recalls. The city of Denver actually quarantined one grow site after a routine fire inspection revealed banned pesticides being used indoors. The Denver Post reports that it continued to find banned pesticides on marijuana products, in one case at levels six times higher than Federal government allows on food products.

Colorado’s regulations on pot growing, including a long (40 pages) list of pesticides allowed for use can be found here.

California, which began legal recreational marijuana sales January 1, 2018, did not even have a pesticide regulation program in place when it scheduled approved recreational sales, this despite decades of experience with medical marijuana and a large and engaged Department of Food and Agriculture. In 2017, a California television station collected samples from 15 medical dispensaries and found contamination in 93% of them.

Pesticide regulations were slow to come, and consumers have been told that products sold during the first six months of legal sales won’t be tested (and must be labeled as such). Any pot harvested after January 1 will be subject to testing for contaminants as well as potency. Stiffer rules are promised by 2019.

You can find the California Department of Pesticide Regulation’s cannabis page, with links to banned and accepted pesticides, here.

Even Washington, with random testing procedures in-place, has had its share of violations.

What’s to be done? States have tried to respond to the problem and follow-up studies show that as they began more testing for pesticides, the percentage of crops testing positive has dropped. But there has been resistance to regulation from growers who feel they need a wide array of pesticides to save large-scale crops from infestations rather than suffering equally large financial losses.

As regulation enforcement takes effect, growers in fear of having their crops recalled have begun to rein in pesticide use while shifting to more natural, organic methods of problem control. In Washington state, where pesticides, even natural ones, must be listed on the label, familiar organic-recommended controls, frequently including neem oil and rosemary extract, are starting to appear.

But marijuana products can’t be labeled organic. Use of the term is regulated by the federal government which considers marijuana illegal. Yet it’s perfectly possible to grow cannabis in a way that’s organic in everything but label.

Private certification programs such as “Clean Green Certified” are stepping in to fill the void. They not only require organic methods in the growing of the cannabis they certify, they also consider a grower’s environmental footprint in terms of water and electricity use.

In some states, strict certification requirements monitored by private businesses grants a partial solution to the problem of required testing. Of course, states would need to oversee the certification businesses to make sure they’re delivering on their promises, adding another complicated layer of, what stoners might call, “hassle.”

The number of growers employing Integrated Pest Management and other effective and often cost-saving natural controls seems to be on the rise now that it’s apparent consumers favor no-pesticide products. That’s a good thing. Educating growers of all kinds in long-term organic practice and encouraging the many who already know and use pesticide-free methods will go a long way towards protecting consumers and the environment.

Not such a good thing: makers of commercial grade pesticides are seeing an opportunity in marijuana legalization. In 2016, Scotts Miracle-Gro CEO Jim Hagedorn told Forbes magazine that he wanted to invest a half-billion dollars in the pot business. “It’s the biggest thing I’ve ever seen in lawn and garden,” he said. In 2017, Scott’s was turned away (PDF) from registering pesticides for use on marijuana crops by Environmental Protection Agency head Scott Pruitt. No doubt, they and others will be back as more states move towards legalization.